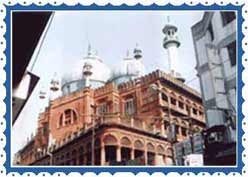 Location: in Jacquaria Street, near the junction of Chitpore Road and Mahatma Gandhi Road
Year of Establishment: 1926

Calcutta Nakhoda Mosque is the largest mosque within the city. It can capacitate about 10,000 persons. Located in Jacquaria Street, near the junction of Chitpore Road and Mahatma Gandhi Road, its foundation was laid by Abdar Rahim Osman, a resident of Cutch, in the year 1926. Nakhoda mosque is constructed on the lines of Akbar's tomb in Sikandra. Read to know more about the Nakhoda masjid of Kolkata, India.

During the Muslim festivities, it is decorated beautifully. Its architecture represents the Indo-Saracenic designing. This magnificent mosque contains a spacious prayer hall, a dome and two minarets. Inside the mosque, an exhibition takes place, which displays extraordinary artistic extravaganza & ornamentation. On all days, except for Sunday, you can buy attar (a perfume made from essential oils and fragrance of flowers) from outside the mosque.