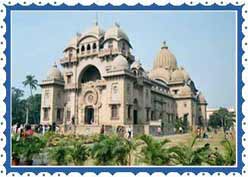 Calcutta Belur Math was founded in 1938 by Swami Vivekananda, the disciple of Sri Ramakrishna Paramhansa, paying homage to his guru. It is situated at a distance of about 6.4 kms from Howrah Station on the banks of the Hooghly River. This place is very easy to reach, as it is well connected by bus and train. Belur math has an amazingly big prayer hall, where you can find the awesome statue of Ramakrishna. Belur Math of Kolkata, India is a very important pilgrimage place.

Belur math houses a beautiful monastery, several temples and also has the headquarters of Ramakrishna mission. This international tourist attraction place is based on the principle of religious fraternity, as was advocated by Ramakrishna Paramhansa. This is also reflected in the architectural design of Math, which exhibits a blend of temple, church and mosque patterns.