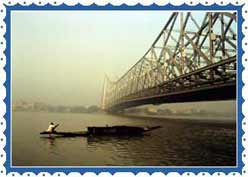 Howrah Bridge, located over the Hoogli River in West Bengal, India, is said to be the busiest bridge of the world. It got its name owing to the fact that it connects the city of Howrah to Calcutta. Hawrah Bridge in Kolkata, India, also known by the name 'Rabindra Setu', was set up in 1874. It stands on two 270 feet high pillars. Calcutta Howrah Bridge is a cantilever truss bridge that was constructed without using any nuts and bolts. Though, earlier it had a tram route, but presently, it is serving mainly as a Road Bridge. Howrah bridge has got two sister bridges also, namely, Vidyasagar Setu and the Vivekananda Setu that are situated at different points over the hoogly river. This bridge acts as an important symbol of Kolkata.