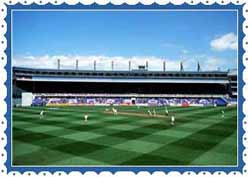 Eden garden of Kolkata, India is one of the major tourist attraction places of the city of joy. Eden gardens is basically a cricket stadium, where people have witnessed the history of Indian cricket. It is the oldest cricket playground in the country and also the finest one. Calcutta Eden Gardens Cricket Club came into existence in the year 1864. The first ever first-class match that took place in the Eden Gardens was in 1917-18 and the first test match to be played here was in January 1934 against Douglas Jardine's MCC. It was in February 1987, when the first ODI match was hosted here. It has undergone a tremendous modernization and infact, today it boasts of its large accommodation that can capaticitate about 1,20,000 persons. Eden gardens of Calcutta definitely falls into the category of must see places.