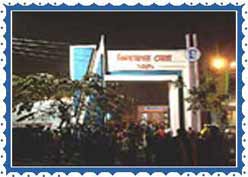 This unique mela was launched for the first time in Calcutta in the year 1994. It was held at the Maidan of Kolkata. The fair is mainly held as a part of social welfare to spread awareness among the people through the systematic spread of education and participatory developmental programmes. It also throws light on the folk cultures of different districts. Cultural competitions consisting of dance, song, drawing, extempore etc are conducted to promote kids. Also medical services are provided in this fair.