Here is provided information on the west Bengal Calcutta religion. Read about the religion of Kolkata India.
Kolkata: Culture of Calcutta: Calcutta Religion 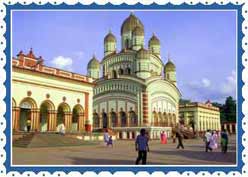 Being a cosmopolitan city, Kolkata represents a blend of different religions. Majority of people inhabiting Calcutta are Hindus. Muslims are in minority. Other minority communities include Christians, Buddhist, Sikhs and Jains. Thus, the religion of Bengal India is not very clear. Read on to know more about the religion of Kolkata West Bengal…

On the basis of religious sects, Hindus can be further classified into a number of categories ranging from monotheists to polytheists. The largest religious sect follows Vaishnavism. In the traditional caste hierarchy, the highest position is held by the Brahmins, who are considered to be the main guardians of sacred scriptures. After Brahmins, the next caste in order of the precedence is that of Vaidyas followed by Kshatriyas and Sudras.