Here is provided information on the people of Kolkata/Calcutta India. Read about Bengali people.
Kolkata: Culture of Calcutta: Calcutta People 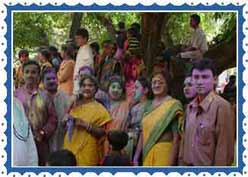 The reservoir of Calcutta people is very comprehensive consisting not just of Bengali people, but also a number of other ethnicities. People of Kolkata India can be divided into a number of categories, namely, Ghotis from West Bengal and Bangals from East Bengal, Biharis, Marwaris, Oriyas, Anglo-Indians, Chinese, Tamils, Telegus, Malayalees, Gujaratis, Assamese, Marathis, Parsees, Nepalese and Caucasian Europeans.

Most of the ethnic groups are living peacefully in Calcutta. However, the relations between Hindus and Muslims are little tensed. Migrants from world over form part of Kolkata's society. Each ethnicity represents a unique feature of its own. Parsees, who inhabited Calcutta before the British had taken over, were converted into entrepreneurs by the colonial powers

Punjabis form a major part of Calcutta's population. They have made an incredible contribution in the fields of irrigation, warfare, technology, arts & crafts, commerce, and business. Chinese people deserve the credit for promoting the religious values and practices of Buddhism and Confucianism. Marwaris today hold high positions in the cotton, jute and banking industry.