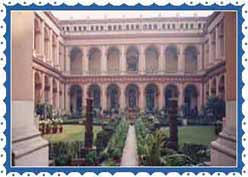 Calcutta Indian museum, founded in 1814, is one of the oldest museums of Asia. It is located in Chowringhee on the Jawaharlal Nehru Road. Indian museum of Kolkata, India provides you a complete plethora of items to glance. Infact, there is a need to spend one whole day to view all the items. In the must watch category, we have the 4,000-year-old mummy and the urn that is said to contain the ashes of Buddha. Indian museum is more commonly known as 'Jadughar' as in house of magic, where you can also enjoy the fossils, coins, Gandhara art, stones etc. Initially, Indian museum consisted of two departments, namely, Geological and Zoological on one hand and Archaeological and Anthropological on the other. However, in 1840, the Economic Geology Department was also added. On entering the museum, you can find the history of evolution of man. Each phase of evolution has been superbly depicted. On visiting the museum, you will also come across the preserves of several antiques of Mohenjodaro and Harappa. Thus, it can be said that the Indian museum reveals the life history and culture of Indians from ancient times till date in the most beautiful manner.