Here is provided information on the Santiniketan/Shantiniketan in Calcutta/Kolkata, India.
Kolkata: Excursions of Calcutta: Shantiniketan 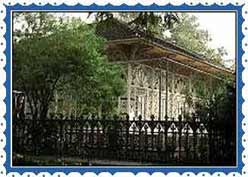 When it comes to excursions in Calcutta, the mention of Shantiniketan is like a must. Shantiniketan in Calcutta, is mainly known for Vishva-Bharati University that provides a platform for the convergence of western and eastern culture. Its foundation was laid by Nobel laureate Rabindranath Tagore. The best part about this international university is that it exhibits the Indian tradition in the most modest manner, while simultaneously incorporating the best of other cultures.

The best time to visit this soothing place is between November to March. Set up in the midst of green lushy fields and forested land, it makes an excellent landscape. Initially, Shantiniketan of Kolkata, India was an ashram that was started by Maharishi Devendranath Tagore in 1863.

Later in 1901, Shantiniketan underwent a modification when Rabindranath Tagore conducted experimental open-air classes to promote education. His effort didn't go wasted and he gradually kept widening the scope. An interesting feature of Shantiniketan consists of the awesome sculptures, mural paintings and frescoes of Rabindranath, Nandlal Bose, Ramkinkar, Bindobehari Mukhopadhyaya and others.


Planning Kolkata / India tour?Enquire Now Get in touch with our Tour Planner